Diary of an Awesome Friendly Kid: Rowley Jefferson's Journal is a spin-off of the Diary of a Wimpy Kid series. It was announced on January 8th, 2019[1], and released on April 9th, 2019. This book is written from the perspective of Rowley Jefferson, acting as Greg's biographer.

On the subject of a sequel, Jeff Kinney said, "I'd really like to write more Rowley books. I think it's a lot of fun, and I think it's really fresh, and he can write in lots of different styles about lots of different genres, so I'd really like to get to there, where Rowley is authoring lots of books."[2] A sequel, entitled Rowley Jefferson's Awesome Friendly Adventure, was announced on February 13th, 2019, and is scheduled to release on April 7th, 2020.

"Get ready for a whole new look into Jeff Kinney’s Diary of a Wimpy Kid! Introducing the newest Wimpy Kid author—Rowley Jefferson! Rowley’s best friend Greg Heffley has been chronicling his middle-school years in thirteen Diary of a Wimpy Kid journals . . . and counting. But it’s finally time for readers to hear directly from Rowley in a journal of his own. In Diary of an Awesome Friendly Kid, Rowley writes about his experiences and agrees to play the role of biographer for Greg along the way. (After all, one day Greg will be rich and famous, and everyone will want to know his life’s story.) But Rowley is a poor choice for the job, and his “biography” of Greg is a hilarious mess. Diary of an Awesome Friendly Kid: Rowley Jefferson's Journal offers readers a new way to look at the Wimpy world—one fan won't want to miss!"
—Amazon blurb

The book starts out with Rowley talking about his journal and him and Greg are best friends. He starts talking also about his family and he doesn't want Greg to find out about his diary, which he does. Greg and Rowley get into an argument and Rowley says if Greg is a jerk, he won't say nice things about him in his diary. Then Greg says Rowley's diary can be Greg's biography and Greg's diary is an autobiography, which Rowley agrees with.

Rowley starts with Greg's life and when Rowley moved to Greg's street in 4th grade. Rowley was scared being in a new place. Then his mom gets him a book to make new friends which don’t work with Greg at first. Greg says that he put a flag in the lot of Rowley’s house before they moved meaning that he owned the house, which wasn’t true. Rowley then talks about Greg’s family.

After that, Rowley mentioned this kid named Tevin Larkin who lives near them. He invited Greg and Rowley to his birthday party but find out they were the only ones invite. They watch a movie about a guy who turns into an animal. After it’s over, Tevin wants to watch it again but the others refused. Tevin gets mad and gets hyper. They try to leave his house but his mom won’t let them. Tevin then catches up with them but Rowley falls in a ditch with a hornet's nest which Rowley gets stung and they leave early. Greg then says he owes Rowley for getting him out of the party.

In the next chapter, Greg and Rowley are playing in the woods but some teenagers make fun of them. They go farther in and make a fort to protect themselves. Rowley then trips over a rock and twists his ankle. Greg then says it’s a gravestone and they're freaked out. Greg forgets about Rowley ankle and runs off terrified. But Rowley's parents call Greg to find Rowley

Then, Rowley talks about his grandpa and how he called him "Bampy" and he died. They visit his old cabin and Rowley takes a shower but he hears footsteps in the hall. Then the door opens but NO ONE was there. He thinks it was his dad but he was at the store. When he comes back, he says it was the wind. But Rowley thinks it was the GHOST OF BAMPY.

The next chapter is the opposite of the last two. One day, Greg calls Rowley and asks him to clean his garage and if he does, he’ll give him HALF of his Halloween candy. Rowley, excited, goes over, and the two clean the garage. Greg, forgetting about the candy, is about to leave but Rowley reminds him. Greg then gets the candy but it turns out to be empty except for three jawbreakers and a raisin. Rowley is mad because Greg promised him a TON of candy but Greg only said HALF. Rowley is about to tell Susan but Greg promised something better than candy. He then gets out paper and a pencil and draws him a Good Boy Award. Greg says Rowley gets one every time he does something good. Rowley then does many good things for Greg but later Rowley tells him he doesn’t want anymore because his binder is full. Greg then tells Rowley he’s making a new system and the first awards were worthless. The new awards are Lil Goodies and if Rowley does fifty nice things/gets fifty Lil goodies, he’ll get a fancy prize under a sheet. It takes Rowley over a month to get them and he turns them into Greg but Greg says after every month, the system resets so he’s back to zero. Rowley, angry, rips off the sheet to find Greg’s dirty laundry. Rowley calls Greg a crummy friend but Greg lies and says that the prize was fake and the real prize is in the basement Rowley needs 100 Lil goodies now. 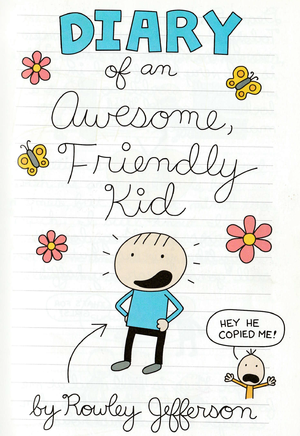