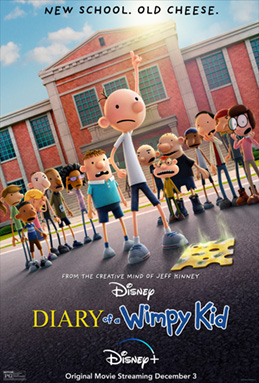 Diary of a Wimpy Kid[1] is a 2021 animated film based on the book series of the same name.[2] It released on Disney+ on December 3rd, 2021. The film was originally intended to be a TV series, but Jeff Kinney confirmed that it would be an animated film.[3] In November 2018, Kinney confirmed to have written two episodes, later stating in an interview with ComicsBeat that it would arrive “within the next couple of years".[4]

In May 2020, in an interview with the Boston Globe, Kinney revealed the origins of the project, saying “This project started off years ago with the idea that we’d create a holiday special for Fox. But the entertainment world has completely transformed since then, and a streaming platform seems ideal for Diary of a Wimpy Kid thus an upcoming animated Disney+ original series based on the book series of the same name."[5]

Greg Heffley is a scrawny but ambitious kid with an active imagination and big plans to be rich and famous – he just has to survive middle school first. To make matters worse, Greg’s lovable best friend, Rowley seems to coast through life and succeed at everything without even trying! As details of his hilarious – and often disastrous – attempts to fit infill the pages of his journal, Greg learns to appreciate true friends and the satisfaction that comes from standing up for what is right.

Greg Heffley is about to enter middle school with his best friend Rowley Jefferson. He gets advice from his older brother Rodrick on how to "survive"; putting emphasis on avoiding the Cheese Touch, which supposedly makes one incredibly unpopular. Greg tries to help Rowley through adjusting, though both end up shunned by the majority of the students, mostly due to Rowley's somewhat childish antics. Nevertheless, they manage to avoid being completely at the bottom of the school hierarchy.
On Halloween night, Greg and Rowley are forced to take the former's little brother Manny with them. While at first annoyed, Greg realizes that Manny's adorable pirate costume allows them to acquire a large load of candy. After a while, Manny and Rowley become tired, but Greg insists that they continue on and take a shortcut through Snake Road, despite his mother, Susan forbidding it. They encounter a trio of teenagers who begin to mock and chase them with water balloons down the road. The kids manage to evade them by tricking them into driving their truck into a ditch and making it home, only for their candy to get spoiled by Greg's father, Frank when he accidentally dumps water on them and Manny outing the Snake Road incident to Susan. Greg is grounded from playing video games for a week.

While playing "tumble trike", Greg accidentally breaks Rowley's arm. Susan discovers this but chooses not to punish Greg any further. Instead, she insists that he do the right thing and be a good friend to Rowley. Greg instead tries to take advantage of Rowley's broken arm, only to get shunned further by the other students who dote on Rowley, but villainize Greg for breaking it in the first place. Greg tries to become a cartoonist for the school paper with Rowley taking an interest in a comic he drew that depicts a character shouting "Zoo-Wee Mama!", but Greg tosses it away and insists on a new one he drew. Rowley insists that Greg's character should say "Zoo-Wee Mama" at the end but Greg told him the joke is old and tells him to leave him alone then Rowley steals Greg's comic then leaves after one last attempt of getting Greg to work with him. While Greg is accepted as the new cartoonist, the librarian butchers his comic, making him a laughingstock. Rowley's comic, which features the phrase that Greg originally came up with, gets accepted, causing a falling out between the friends. Greg and Rowley argued at the lunch table which ended with one of Rowley's goons punching Greg in the face.

Rowley befriends a boy named Chirag Gupta and starts hanging out with him. To get back at Rowley, Greg decides to hang out with Fregley, an incredibly weird and unpopular boy. Greg has a sleepover at his house but is immediately put off by his odd eccentricities. Fregley eats a candy bar that Greg had and becomes hyperactive and chases him with a booger; forcing Greg to hide out in the bathroom for the remainder of the sleepover. The next day, Greg and Rowley confront each other and are ushered by the other kids into fighting, only for the trio of teenagers to return to get revenge on the boys. The teenagers force Rowley to eat a piece of The Cheese and are about to force Greg to do it, but are saved by the intervention of Mr. Wnuderground The other children return to see what has transpired and was about to conclude that Rowley ate the cheese but unexpectedly to protect his friend, Greg claims that he was the one who ate the cheese, causing everyone to run from him in terror. Greg and Rowley resume their friendship better than ever before as the former quickly realizes that having the cheese touch is a blessing as it forces everyone to give him and Rowley space, as well as a personal lunch table to themselves. The movie ends with Greg saying if Rowley gets in his way he'll tell the whole world who really ate the cheese.

A month later, on the 17th of October, Jeff Kinney's son Will Kinney leaked 2 images of the film. On October 19th, a trailer was released alongside an announcement that a Vancouver-based studio named Bardel Entertainment would provide animation for the movie.

A special Disney+ Cover Edition book was released to hype up the movie on November 23rd. 3 days later was when a teaser was posted onto YouTube.

On November 28th, a television spot of the movie was released. It was also revealed that the movie would be super short, being only a shy of an hour (58 minutes) long.

Just 2 days before release on December 1st was when Disney released a video where Jeff Kinney talks about the movie in a minute.

The movie was finally released on December 3rd, 2021. Another film based on the story of Rodrick Rules is slated to release in 2022.

On the review aggregator website Rotten Tomatoes, 69% of 13 reviews are positive, with an average rating of 5.20/10. Metacritic, which uses a weighted average, assigned the film a score of 50 out of 100 based on 4 critics, indicating "mixed or average reviews".

As from the fans, many considered it to be disappointing and nowhere as good as the first three live-action movies. Some compliments were old characters returning and the focus returning to middle school, but there were still more criticisms such as Rodrick and Frank's lack of screen time, the uncanny CGI visuals, the voice-acting quality (more specifically Susan's mic quality), making Greg too sympathetic (which takes away a lot from Greg's character development), making Rowley come off as unlikable, many important scenes being cut out (such as the Safety Patrol incident which makes the drama even less powerful than it already is and making Rowley come off as unlikeable) and the fact that it was only 58 minutes (which is way too short for a feature film). Still, this movie is considered to be WAY better than The Long Haul movie and some people still like this film.

Changes from the Book and 2010 Live-Action Film