The movie starts out with Greg Heffley (played by Zachary Gordon) and his family at the roller rink, where he reunites with his best friend Rowley Jefferson (Robert Capron) and his classmates, Fregley (Grayson Russell) and Chirag Gupta (Karan Brar). He meets Holly Hills (Peyton List), who immediately becomes his love interest.

Greg's older brother, Rodrick (Devon Bostick), tricks Greg into trying to skate with her and starts persuading violent teenagers to enter the roller rink. Their mother Susan Heffley (Rachael Harris) and father Frank Heffley (Steve Zahn) misunderstand and humiliate him by speaking to him on the speaker phone and then carry him off the rink. Then Greg tries to tackle Rodrick, then he landed on someone's birthday cake, and then kids attack Greg.

Afterwards, Mom has noticed that the boys haven't been getting along so she devises "Mom Bucks" to pay them if they spend time together where they can trade in for one real dollar, but this unwittingly makes thing worse. Meanwhile, Greg and Rowley try to make a funny YouTube video by Rowley lip-syncing to "Tik Tok" by Kesha, unfortunately (despite Rowley at one point sitting on a tinfoil ball with spikes made by Manny) it proves to be awful, getting only 4 hits. After a talent show is advertised on TV, the brothers see this as a big opportunity – Rowley suggests that he and Greg perform magic tricks, but Greg rejects the idea whilst Rodrick sees this as his band's big break.

On Sunday, the Heffley family goes to church but Greg is reluctant to go inside, as a melted 3 Musketeers chocolate bar, intentionally placed on his seat by Rodrick, has stained his trousers. Greg's mothers give him her sweater to cover up the stain, but the cover-up backfires when Rodrick exposes Greg's pants. Then, the church people get shocked at Greg's pants. When Greg licked the chocolate, everyone was disgusted thinking it was poop. The boys ultimately end up in a scuffle on the floor and as punishment, they are to spend a whole weekend together to bond, while their parents leave on a trip to Rockin' Rapids. Against his parents' orders, Rodrick hosts a party at the house and locks Greg in the basement. Rowley comes to "save" Greg, but Rodrick locks him in the basement as well, until a call from their mother results in Rodrick letting the two out, in return for their silence on the matter. 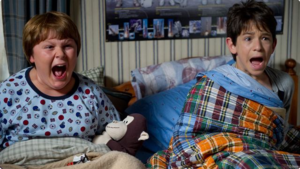 A picture of Greg and Rowley from the movie

The next day, the two get a call from their mom, informing them that Manny got sick in Rockin' Rapids and they are returning early from their trip. The house is trashed, and the boys only have an hour to clean it up and erase all evidence of the party before their parents arrive home. When they see that one of the partygoers wrote on the bathroom door in permanent marker, they replace the door with a different one. Afterwards, Greg realizes that the new door does not have a lock, while the old one did. When their mother notices this, she confronts both boys individually. Greg confesses, but in order to prevent Rodrick from getting angry at him, he says that the party was only a band rehearsal, and the two escape punishment. Rodrick thinks Greg denied everything, and the brothers become friends.

The boys go out for a night of fun, getting smoothies and pranking unsuspecting people. However, one prank goes too far and Coach Malone chases them into a mall. They escape by tricking him and return home laughing, only to find that their father has inadvertently come across photos of the party and discovers their mother knew about the party, to which he scolds her for not telling him and Rodrick scolds Greg for telling their mother and taking pictures during the party. As their father and their mother think about their punishments, Greg tries to apologize but Rodrick only says that they are no longer friends. Greg is grounded for two weeks with no video games, and Rodrick is grounded for a month and is not allowed to participate in the talent show. Rodrick begs them to give him a different punishment, but they refuse. Devastated by his punishment, Rodrick tells Greg he is so dead. Then Greg and Rodrick spend the weekend with their grandfather in his retirement home. Greg runs into Holly at the retirement home and bond other their mean older siblings and irritating little siblings. Greg writes his feelings in his diary believing running into Holly was a change of fortune, which Rodrick gets a hold of and reads out loud waking Greg up. Rodrick then threatens to tell Holly and runs towards the lobby to do so. Greg chases after Rodrick in his underwear and manages to snatch away the diary. He runs to the bathroom, rips out the pages of the diary, and flushes them down the toilet. He discovers he is in the ladies' bathroom, but manages to escape the mob of angry women who think he is a "peeping tom". However, he finds that Rodrick caught everything on tape via security camera and threatens to show it to everyone sooner or later.

At the talent show a few nights later, Rowley's performance is unable to take place, as his about-to-be eight-year-old assistant Scotty gets stage fright. Greg's mom says Greg will do the show with Rowley, but Greg refuses, saying that he will look humiliated. When Rodrick goes to his band, Greg follows and watches Rodrick's band member, Bill Walter, kick him out of the band he created. Greg bargains with his mom to allow Rodrick to perform, saying that if she allows him to perform, he will do the performance with Rowley. His mom agrees to this. Rodrick thanks their mom, sees Greg, and nods at him for letting him play. The magic show is a hit with the audience and Holly meets Greg and Rowley backstage to tell him she loved their show. However, Patty Farrell says it was "pathetic" and got bird poop dumped on her. Rodrick and his band performed but the crowd is not impressed until they see Greg's mom dancing, and start to dance along. Greg is happy for finally having fixed the problems with his family.

Rodrick drives Greg to school, as the boys have now forgiven each other. Rodrick also gives him a tape containing that "embarrassing moment" at Leisure Towers. The boys then create a new friendship, realizing it is fun to have a brother. Later, Greg and Rowley put the video of the talent contest on YouTube and calls it "Lame Band with Crazy Mom Dancing" which becomes an instant hit. Rodrick shouts that Greg is "so dead" and the film closes.

The film's trailer was shown with Gulliver's Travels on December 25, 2010. It was later released online on the official Facebook page on January 3, 2011.

Differences Between the Book and Movie

A lot of differences were made between the book and the movie. As the book put in several random scenes, the movie ignored several elements of the novel and formed a conflict in which the party that Rodrick threw has a bigger role. Rodrick and Greg actually were put to test by Susan Heffley to form a bond together and become more friendly towards each other in the film.