"There you go!"
—Grandpa says as he fills Greg's plate with watercress salad, thinking Greg likes it.

Grandpa Heffley is the lovable but clueless grandfather of Greg, Rodrick and Manny, the father of Frank Heffley, Joe Heffley and Gary Heffley, the father-in-law of Susan Heffley and the widower of Nana Heffley. His first appearance was in Rodrick Rules, where he offered to let Greg and Rodrick stay at his boring retirement community, Leisure Towers; the experience was terrible for Greg. He was seen again in Dog Days, where he finally confessed to Frank at brunch that he ran over his dog, Nutty, enraging Frank. In The Ugly Truth, he appears at his son Gary's wedding, and the family reunion and even babysits Rodrick and Greg as their Gramma was on a cruise. In Cabin Fever, he appears only in a photo, but he makes a younger appearance when his son, Frank told him about his bully, Billy Staples he came to Billy's house along with his wife, telling Mr Staples about Billy's actions. In Hard Luck, Greg mentioned that Grandpa had a girlfriend because at Leisure Towers, a lot of women lined up at Grandpa's door trying to win him over with casseroles and baked goods. He dated a widow named Darlene, who broke up with him in Diary of a Wimpy Kid: Old School. Greg is his favourite grandson. 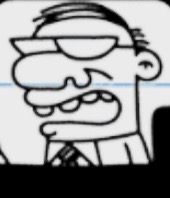 An even younger Grandpa

Grandpa is strange, critical, unpredictable, and quite ignorant at times. He means well and seems pretty jovial and kind however. He sets his TV only on the CCTV channel, which he enjoys watching, infuriating Greg as he cannot watch any "real" television shows at his grandpa's retirement home. He makes a dish called watercress salad, which is an uncooked salad with vinegar and green beans. Greg and Rodrick thinks it is disgusting; their grandpa seems to not care. He loves to play a game called Gutbusters as well, and forces Greg and Rodrick to play; Greg always wins because his Grandpa thinks the nonsensical jokes are funny and he also beats Rodrick because he laughs on purpose because he keeps his mouth filled with milk when Greg's turn comes. In The Ugly Truth, it is revealed that he smoked when no one is looking. He might have been told on by Greg, as he has never been seen smoking since. In Old School, he said he accidentally invited all women from his dating site when he tried to invite only one to watch a movie when he claimed to only trying to invite one.

Grandpa is always seen with his spectacles, but he takes them of when sleeping. He also wears dentures, is short and overweight, wears old fashioned clothes (being that he is of the baby boomer generation, being born around 1941) and suspenders. He is half bald with only some hair.