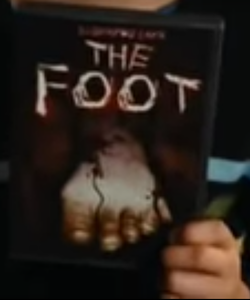 The Foot is a fictional horror movie made by Leonardo Laka which stares an antagonist with the title name. This movie was watched by Greg Heffley and Rowley Jefferson watched the movie during a sleepover in Rodrick Rules (2011 film).

The film opens with Terence and Ingrid going into an abandoned mansion and then seeing a picture of a guy with only one foot which lead Ingrid to question his other foot. And then Terence screams in shock as he sees a foot bouncing around. In the next scene, the couple was preparing for bed but Ingrid was in bed and told Terence that he should clip his toenails when Terence was brushing his teeth. The Foot lands on Ingrid's face. This movie possibly ends with one of the foot's victims, Terence, running to save a woman named Ingrid, at which point Greg turns it off because Rowley was too scared. Afterwards Greg and Rowley tried to sleep only to be awakened by something in their bed, they thought it was the Foot, though it only turned out to be Manny, who was trying to grab some of Greg's candy.