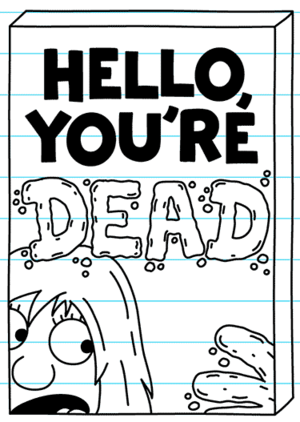 Hello, You're Dead is the title of a horror movie owned by Rodrick. Its plot involved a disembodied Muddy Hand going around killing people, and the last person who sees it is always the next victim. When Greg and Rowley watched the movie during a sleepover at Greg's house, Rowley had his eyes and ears covered the whole movie while Greg watched. He described it to Rowley afterwards.

Greg felt that special effects in the movie were really cheesy and wasn't even scared until the very end of the movie, after the Muddy Hand kills its last victim, it crawls towards the screen, implying the viewer(s) is/are the next victim(s), which scares Greg. Greg and Rowley (especially the former) took drastic measures to avoid the (obviously impossible) scenario as much as possible.

This only leads to Greg's parents finding out about their horror movie night, disappointing them. Susan created the Reading Is Fun club, possibly as a direct result of Greg watching this movie.