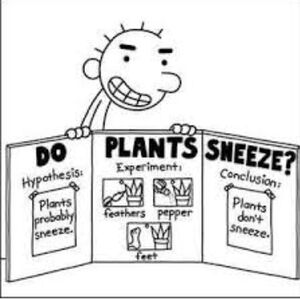 Do Plants Sneeze? was a project by Greg and Rodrick. In Rodrick Rules, it wasn't shown if Rodrick won anything or not however in the online book, Rodrick got no ribbons for the project. Rodrick thought plants probably sneezed, but after testing with feathers, pepper, and feet, concluded plants didn't sneeze. He goes on to make another science project about plants called "What Type of Music do Flowers like Best?"