The New Year's Incident was an incident in the online book and the first book where Greg and Manny were horsing around in the basement with a tiny black ball of thread. Manny slaps Greg's hand making him drop the thread and accidentally swallowing it. Manny ran upstairs to Susan and told her Greg made him eat the spider. Greg then explained to Susan that it wasn't a spider, just a ball of thread. Susan brought Manny to the table and got three small items asking Manny to point to the closest to the thread he swallowed. But instead, he went to the fridge and got an orange. Susan sent Greg to bed at 7:00 and he's not watching the special on TV. 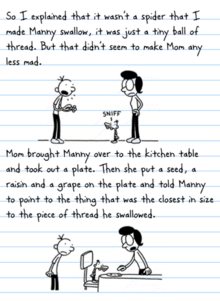 The actual size of the "spider", according to Greg

According to Manny, the spider was the size of an orange. Greg gets grounded and has to go to bed by 7 pm.

The New Year's Incident is a good example of how Susan's overprotection towards her children is harmful to their development. Out of her overreaction worrying about Manny, she was not only unable to realize it was impossible for him to swallow something the size of an orange, but also negatively spoiling Manny and punishing Greg for nothing, contributing to make Greg and Manny less closer to each other, since Greg decided to never play with Manny again after being punished for spending time with him.