"A boy needs a dog, Frank!"
—Joe talking to Frank about getting a dog.

Joseph "Joe" Heffley is the younger brother and rival of Frank Heffley, brother-in-law of Susan Heffley, and uncle of Greg Heffley, Rodrick Heffley and Manny Heffley.

Joe comes to Greg's house late for Thanksgiving. His children all call their uncle "Aunt Fwank (Frank)." Susan says that this is cute but Frank says that Joe taught them to do that. When Frank goes down to the basement to do edits to his Civil War diorama, Joe sneaks down and says "Nice toys, big brother!" Frank explains everything to Joe, but Joe didn't listen to a single thing he was saying. Greg mentions that the year before that book takes place, Manny was approximately 2 weeks from getting out of diapers, but Joe puts a stop to it by saying "Watch out for the 'potty monster,' little fella!" Every-time time Frank had to change a dirty diaper after that, he started cursing Uncle Joe under his breath!

Diary of a Wimpy Kid: The Last Straw 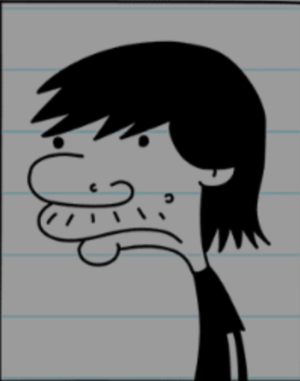 Joe as a teenager

Joe makes a brief appearance on Easter at church. Greg says that when the songs start, he holds Greg's hands, even though he doesn't have to. Greg also says he has an iron grip. when they sat down Greg makes a cuckoo sigh to show he wasn't part of the holding hands to Holly and the rest behind him.

Greg says he asked Joe to encourage Frank to buy a dog. Joe slaps Frank's back saying "A boy needs a dog!" Later he is at Greg's birthday party and his dog Killer eats some of Greg's birthday cake.

Diary of a Wimpy Kid: The Ugly Truth

He and his brother Frank are trying to get Greg to be more responsible and not end up like their brother Gary Heffley. He appears at Gary's fourth wedding and the Heffley family reunion.

Uncle Joe is evidently the most troublesome character in the series, who inadvertently embarrasses, annoys and harms Frank by causing him lots of pain and disgust. Uncle Joe is classified as very immature, childish, and overly-affectionate.

Uncle Joe is shown having a Mexican-style mustache, black hair and western-style clothing, looking more like a cowboy in Greg's illustrations. Even though he appears to be designed like a teenager.

Frank is Joe's older brother whom despises Joe who always picks on him. Joe convinced his kids to call Frank "Aunt Fwank", much to Frank's annoyance.

Not much is know about is Joe's relationship with his younger brother Gary, though it is better then frank's.