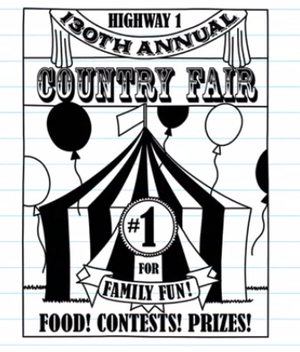 The annual Highway 1 Country Fair was a place Greg's family read about in Family Frolic, it has been running for over 130 years. The Heffley family visited the place in The Long Haul.

When they arrived at the fair, Greg and Rodrick, along with their father went and ate fried butter on a stick. In which their mother should have told them not to eat because of her dislike for unhealthy food. After about an hour of walking the fairgrounds, their father left back to the car to see if Manny was awake yet.

While Greg and Rodrick were wandering around, they came across a tent, and something big was going on; it was a Foulest Footwear contest. While waiting in line to participate, both of them were arguing about who should get the prize, which led to a compromise at the end of their argument. Rodrick wins the contest and it is sent to the national competition and he earns a free butter on a stick because of the coupon he won. Greg decided and told Rodrick that he can have the prize to himself because the thought of eating more butter made Greg feel slightly nauseous.

Later in the livestock area, Manny guesses 243.1 which was the closest to the weight of the hog for guessing nearest to which there was a competition, this turned out to be the actual weight. They win a live baby pig and the judge wasn't allowed to have it returned to him despite attempts by his mother to tell him that they didn't want the pig. They later drive away.