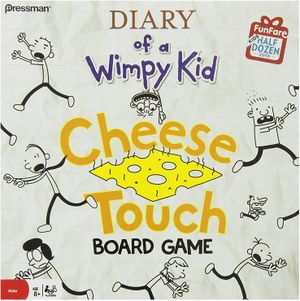 Front cover of the Cheese Touch board game

Diary of a Wimpy Kid Cheese Touch is a board game released in 2010 and in Germany, in 2011. The designer is not credited and Jeff Kinney was the artist. It also has a yellow toy cheese piece included in its box. 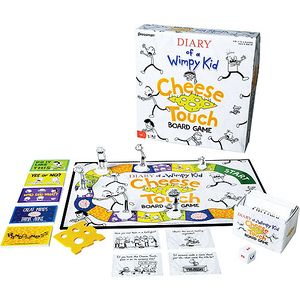 The board game and its pieces

Move your mover around the game board. Depending on where you end up, you'll be playing different categories.

In Who Said What, all players will secretly write down an answer to a question like "if you could only eat one food for the rest of your life, what would it be?"

Go through the answers and try to guess who said what. Correct answers move you closer to finish. But wrong answers can give you the cheese. Try to get rid of it as fast as you can.

Even though there are eight characters on the board cover, only four of them including Rodrick, Greg, Fregley and Rowley are playable while others don't have any movers.