Greg Heffley believes that his life is being broadcast on TV and that his deceased relatives are watching over him from Heaven. When a school book fair starts, he writes about how Susan, his mother, wants him to be more creative. Greg buys various trinkets, and Susan makes him return them and buy books, so he chooses the Spineticklers series. One book gives him a plan to freeze himself and be thawed out in a hundred years.

As Halloween approaches, Susan sends Rodrick to buy decorations, and he buys a noisy plastic witch that scares Greg. Greg then talks about the geese that have flocked to the neighbourhood, and then his family's pet pig. Greg wants Halloween candy, so he joins the school's Balloon Brigade, the prize being a jar of candy corn. He then suspects that his Spineticklers books are giving him nightmares and that adults are trying to get them banned.

Susan is disappointed in Greg for his "pattern of deception" about the supposedly stolen LEGO brick, reminding Greg of lies he has told and has been told. Susan enjoys college and tries to get Greg and Rodrick interested, although Greg still plans to be a video game tester or a garbage collector. Susan takes Greg to the college campus and he helps a girl study for her psychology test but is disappointed when he learns that she already has a boyfriend.

Greg hears about Mariana Mendoza's Halloween party and wants to attend, but hears that she is only inviting people who are in the school band. To get invited, he takes up playing the French horn. He then learns that Mariana is inviting only the woodwind section and decides to go with Rowley, who plays the flute, like a two-headed monster. Susan attends the party as well and sets up party games, which Greg ends up enjoying. He leaves the party early when Rowley needs to go to the bathroom.

Greg gives up on playing the French horn, but his father, Frank, refuses to let him leave the band. At the Fall Concert, he and Rowley are locked in the band room. Greg rips his pants and has Rowley colour his underwear with marker, at which point Frank comes in and accuses them of "goofing off," grounding Greg. Greg gets hungry and looks for candy, finding a bag of chocolate chips. He calls Rowley, and while going to get paper towels to clean up the now-melted chocolate chips, Greg finds bags of gummy worms and gets the idea to make a horror movie with them. 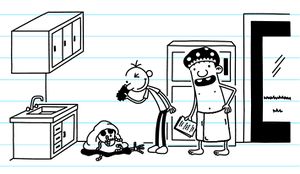 Greg writes the script for the movie, titled Night of the Night Crawlers, and has Rowley storyboard it. Greg records the scenes, with Rowley being the only actor in the movie, and spreads gummy worms outside for a scene in which a man looks outside to see the nightcrawlers in his yard. He finds the pig eating his gummy worms, and Rowley notices the geese outside, so they plan to get Rodrick's wolf mask out of the basement. The electronic witch is activated, and Rowley runs out of the house in fear and climbs up a tree, then Frank arrives home.